For Thrissur-based couple Harikrishnan J, and Lakshmi Krishna, the pandemic was a blessing in disguise. It helped them realise their ultimate travel dream. In fact, it was even before the pandemic hit that the couple had begun planning for a lifetime of adventure and exploration.

“Our love for travel resulted in a backpacking honeymoon trip to Thailand in May 2019. We enjoyed the trip so much and started TinPin Stories, our YouTube Channel, as an excuse to travel,” says Harikrishnan. Later that year, they quit their jobs in Bengaluru. Harikrishnan quit his sales gig and Lakshmi, a graphic designer started freelancing to travel easily. They undertook small trips to different destinations such as Rishikesh, villages in Himachal, Hampi and Chikmagalur in Karnataka before they hopped into their Hyundai Creta in October 2020 to live and travel in it.

“Travelling by car has been a dream for a while. We have been planning an international road trip for some time, but with most international borders closed by October, we had to ditch our plan to go on a bike tour to Thailand. The next idea was to travel across India by public transport. Eventually, we decided to travel by car, sleep in the car, cook on our own and explore places at our own pace, as it was safer,” says Harikrishnan. It wasn’t an easy decision, they confess. But with the support of their loved ones, they were able to take the plunge. “Only because our families are completely supportive, right from our decision to quit full-time jobs to travelling in a car during the pandemic, we are able to pursue our travel dreams,” says Harikrishnan.

Preparing for the journey

Before they set out, Harikrishnan and Lakshmi packed 10 pairs of clothes each, minimum cooking essentials, a bucket and a mug and of course, a laptop to edit videos, for the journey.

For the nights and nap breaks, they decided to add additional headrests for the backseats, fold the seats and spread a mattress to convert the backseats into a bed. “The budget we had for the trip was roughly 2.5 lakhs. But so far, our real expenses have been far lower than our budget,” says Harikrishnan. “While figuring out the budget prior to the journey, we accounted for a higher budget for water. However, after leaving Kerala, filling water at RO Filter stations has proven cost-effective at Rs10 per litre. We carry three cans: one 10-litre can for washing and two cans for drinking water.”

The journey began from Thrissur, Kerala on October 28, 2020. Their first stopover was at Bengaluru and from there, they travelled towards Udupi. Ask the couple for the best moments and the list is endless. They recount tales with excitement still in their voices. “We were standing on the banks of the Suvarna river in Udipi and taking pictures when a boatman and his 10-year-old paddled towards us from the middle of the river. They wanted to give us a free cruise across the water. Their generosity touched us. We connected quickly in spite of the language barrier,” recounts Harikrishnan. From Udupi, they moved to Gokarna, where they experienced the psychedelic colours of the bioluminescent sea in the wee hours of the morning.

At Yelapur in Karnataka, they spent time with the Siddi tribes of African ethnicity. They travelled further through Kolhapur and Mumbai, moved ahead through Aurangabad, Bhuj, Rann of Kutch, Udaipur, Pushkar, Jaipur, Jaisalmer and are now crossing Jammu and Kashmir. So far, they have travelled 10,000km. And they’re still going.

The journey, originally planned for 60 days, has now crossed 130 days. Harikrishnan and Lakshmi hope to reach Kerala by early April. True believers of the ‘go with the flow’ philosophy, the couple has only a rough route in mind and decides to stop along the way based on recommendations from locals, before moving to the next location in their route map.

Living in the car

Lakshmi and Harikrishnan take turns to cook and drive. They mostly prepare their meals on the roadside, sometimes accepting invitations from villagers to dine with them. Every once in a while, they eat at a dhaba. “We carry a 5kg gas cylinder and a one-burner stove with minimum essentials. We usually cook in the morning and for lunch, we often make rice which we might have for dinner too,” says Harikrishnan.

Most of the time, they park their car in petrol pumps, and sleep in the car at night. Come morning, they freshen up and bathe in petrol pump washrooms. “The first couple of days, I found it difficult to carry the bucket and mug to the washroom and bathe there! But now I am used to it. I usually adjust to any atmosphere and so this has become like a habit now. If we find the washrooms aren’t hygienic, we move on and check for another,” says Lakshmi. 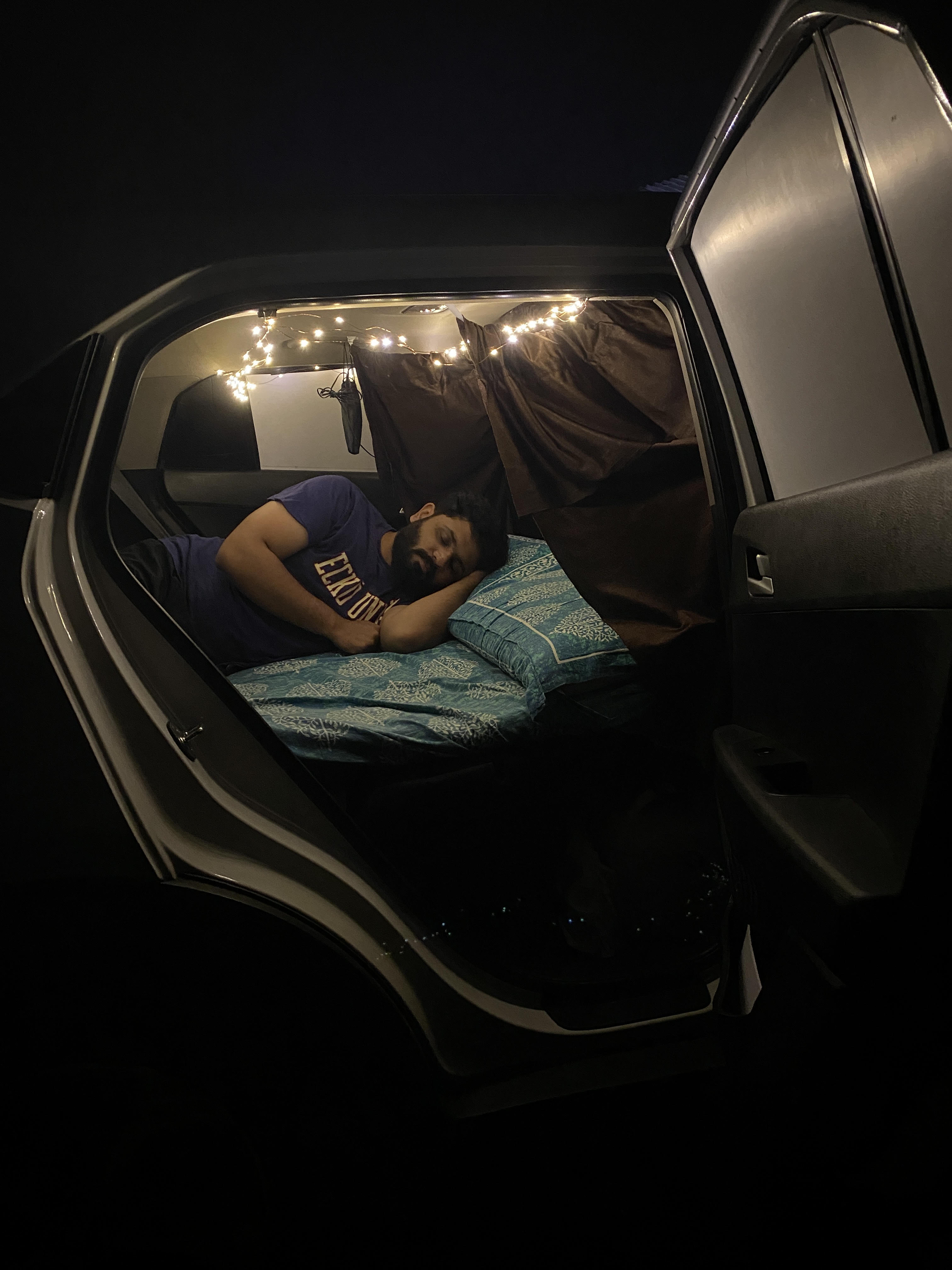 During the four-month journey, COVID has played spoilsport only a few times. In late January, they were forced to live at a relative’s place because of the curfew in Rajasthan. Apart from that, the journey has been relatively smooth and fuss-free.

For the couple, each day is filled with fun and adventure. “Travelling expenses are met by our savings. We have started earning a small income from our YouTube channel recently, but nowhere near covering our travel expenses,” says Lakshmi. Still, they persist. The couple wants to dispel the idea of India being unsafe for travellers and encourage others to explore the country and its varied regions, cultures and foods. Says Harikrishnan, “120 days on the road across India with my wife is enough to tell me that India is a safe place to travel.“